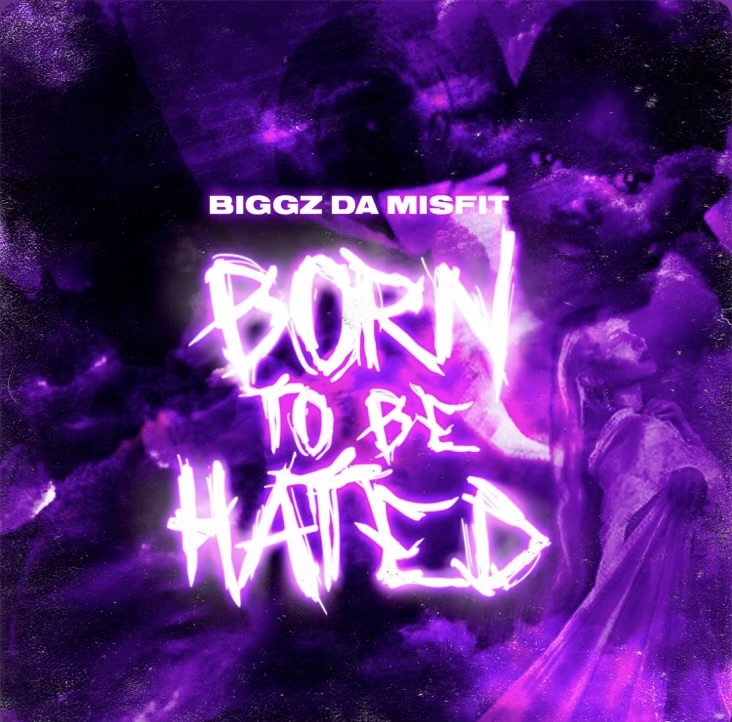 Biggz Da Misfit’s 2021 album Born To Be Hated is pro. Musically, lyrically, and production-wise, this album holds its own amid the best of classic and contemporary hip-hop. It’s understated, mellow, and smooth without being lighthearted or superficial—a feat that a lot of artists miss the mark on. But Biggz Da Misfit is here for the real talk, touching on topics like death, grief, and the struggle just to get by. Woven together by a common feeling of cool confidence and subtle nostalgia, the nine tracks that make up Born To Be Hated reveal Biggz Da Misfit as a voice to pay attention to in the world of contemporary rap and hip-hop.

The album’s opening track, “Hold On,” immediately sets the tone for the album’s characteristic smooth and dreamy sound. Listeners will immediately recognize the great production value, rich and present vocals, and earnest lyrics. In fact, Biggz’s lyricism shines through on every track. This isn’t an album full of fluff and catchy one-liners repeated over and over. Biggz is a writer and poet, and it’s easy to tell that he pours a lot of his attention into his words. “Fake Friends” combines elements of contemporary pop and hip-hop, showcasing yet more clever lyricism with lines like “coolin’ on the ledge like a pie” (genius). Biggz raps like an industry veteran, bringing his easy, rhythmic flow and utter confidence to everything he does.

One of the most interesting things about this album is the way that Biggz combines his smooth, mellow sound with some pretty heavy subject matter. The album’s fifth track, “Crazy,” perfectly encapsulates this by being melodically bright, incorporating subtle elements of electronic pop music with the more standard bass, keys, and drums, all while dealing with the all-too-familiar topic of finding yourself in a relationship that isn’t necessarily good for you. But this isn’t the only take on love we get from Born To Be Hated: “Don’t Worry” offers up an emotional and heartfelt love song about commitment and true connection, while “Worried Sick” harkens back to Biggz’s relationship to his mom, who he has cited having a close relationship to.

Throughout almost every track, there’s a tumultuous element Born To Be Hated, much like the way the human experience itself is filled with the full range of emotions. Despite its easy, laidback vibe, much of the album is characterized by minor chords and an almost dark, dreamy feeling. This isn’t a feel-good, party album. It’s a serious contemplation of life and all that comes along with it—the joyful and the infuriating, the playful and the heartbreaking.

My favorite track on the album is “3 Jay’s.” It sounds to me like a slowed-down pop song, weaving in the same nostalgia and ease that can be heard on the rest of the album, with its catchy guitar and synth intro and its addictive vocal melodies and drumbeats. Biggz’s flow and rhythmic sensibility here are especially captivating, and when combined with the song’s generally masterful production value and creativity, it’s impossible to deny this as a track you’ll want to listen to over and over.

The album might be called Born To Be Hated, but I have a feeling Biggz Da Misfit is actually destined to be loved and respected by many. This album follows in the footsteps of classics like Lil Wayne, an artist Biggz draws inspiration from, by combining the sensibilities of a songwriter and poet with the production value of the best of modern hip-hop. With even more in the works from this rising talent, fans should keep an eye on Biggz Da Misfit’s Spotify.