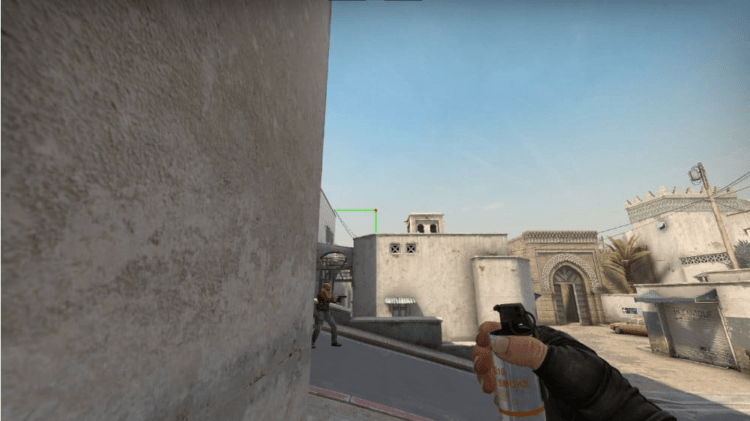 The worst possible way to go out, in the beginning, is by a tricky sniper. If you are playing as a counter-terrorist then smoke in front of the corridor is one of the best smoke spots in dust 2. Terrorist snipers have a tremendous advantage because of their spawn point. They can quickly take out the players crossing the corridor without a curtain to protect them.

Dust 2 is a classic iconic map with a tactical advantage in perfect balance for both teams. CSGO Dust 2 map is a flawless successor to CSGO dust. The dust 2 maps have many variants but the original one is from the classical counter strike in 2001. Due to its immense popularity, the passionate CSGO dust and CSGO dust 2 lovers made many versions of dust 2. All of the dust 2 maps have the passion and love poured into them.

The door to the right of CT spawn and Along

The Bomb plantation site A

The inside area leading to bombsite B and CT corridor

The ramp leading to T Spawn

The ramp leading to T spawn via tunnel

The area behind the corridor in front of the mid ramp

The upper part of the tunnel where Terrorists enter the tunnel

Inside the tunnel but down the stairs

The exit of the tunnel on B site

Near the car on Site B

The upper portion of site B where boxes are located

The ramp leading to A site and Along

The area between CT and B ramp

The doors near the T mid

Near to the top of mid

Where Along ends and Mid Doors begin

Middle of CT and T spawn site. Located above the right corridor ramp.

The area from Bombsite A to Side Doors

The left side of CT spawn

A section behind the site A

Hole in Site A can be used for ninja defuse

Stairs in the tunnel

Best grenade spots in dust 2 are side mid, tunnel lower and upper, catwalk, corridors, and mid ramp. For terrorists, the grenade advantage is a litter higher if the CTs are rushing in from mid ramp. The ramp excels the grenade a little further when it touches down. So, it gains more momentum and reaches the corridor (almost). So, for the Ts best grenade spots in dust 2 include that position.

CSGO dust 2 Callouts make it easier to pinpoint the exact location of the enemy. This way your team can know your position and the enemies as well. They can act accordingly and gain a significant advantage over the opposing team.

I was on dust 2 once and it was a normal day. As I went through the corridor going up the ramp. I was aiming for the ramp on the Ts for a kill but before I could see what’s up there A Grenade came flying right into my face. And that was it. With the sheer force and momentum of the grenade, I flew back like a potato chip when the grenade exploded in my face. The dead animated body of the GIGN was found halfway through the corridor.

Skate Helmet: How to choose the ideal protection in 2020