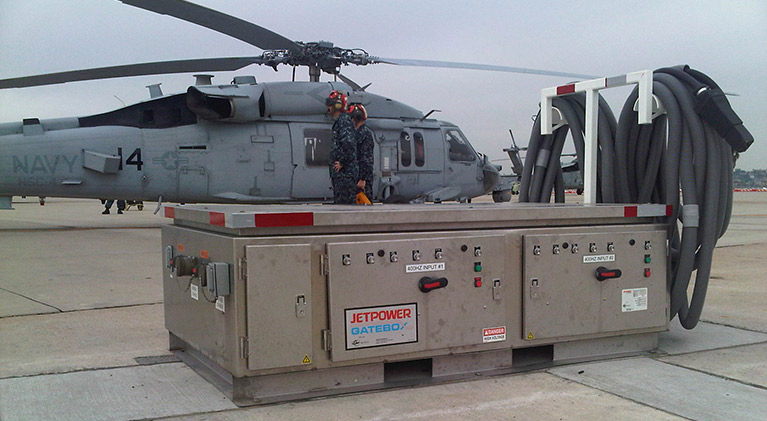 Helicopter GPUs are basically power suppliers for maintenance tasks and engines starting when the helicopter is on the ground.

In aeronautical jargon, they are known by the acronym of their English name: Ground Power Unit, but we refer to them as GPUs.

In this article, we will refer to portable and hangar starters for light aircraft and helicopters.

There are several brands that manufacture and distribute GPUs for helicopters, but in this article, we are only going to talk about the main ones.

Why do helicopters need a GPU (Ground Power Unit)?

We can all imagine the expense in resources involved in starting the engines of any aircraft. When the aircraft is in flight, the same engine power provides enough energy to cover all onboard needs.

This is not the case when the aircraft is stationary, since ground starting can be dangerous for the technicians and personnel in charge of tuning the aircraft. Depending on the type of aircraft or helicopter, we will need a different GPU model, adjusted to the requirements and characteristics.

What are the benefits of a GPU or aircraft starter?

Above all, a determining factor for their acquisition is that they preserve the life of the engines and protect them from improper use. An engine of any aircraft has a high price, therefore, we cannot gamble by using unsafe resources or, sometimes, solutions according to the occurrence of any technician.

This, sometimes, has meant leaving some of the engines unusable with what this means in losses, both in operability and in the recovery of the engines. In this case, a GPU can save us from these serious inconveniences for a derisory amount compared to the losses that could be caused by not having it.

Anyone with aeronautical knowledge, could do nothing but advise it, strongly.