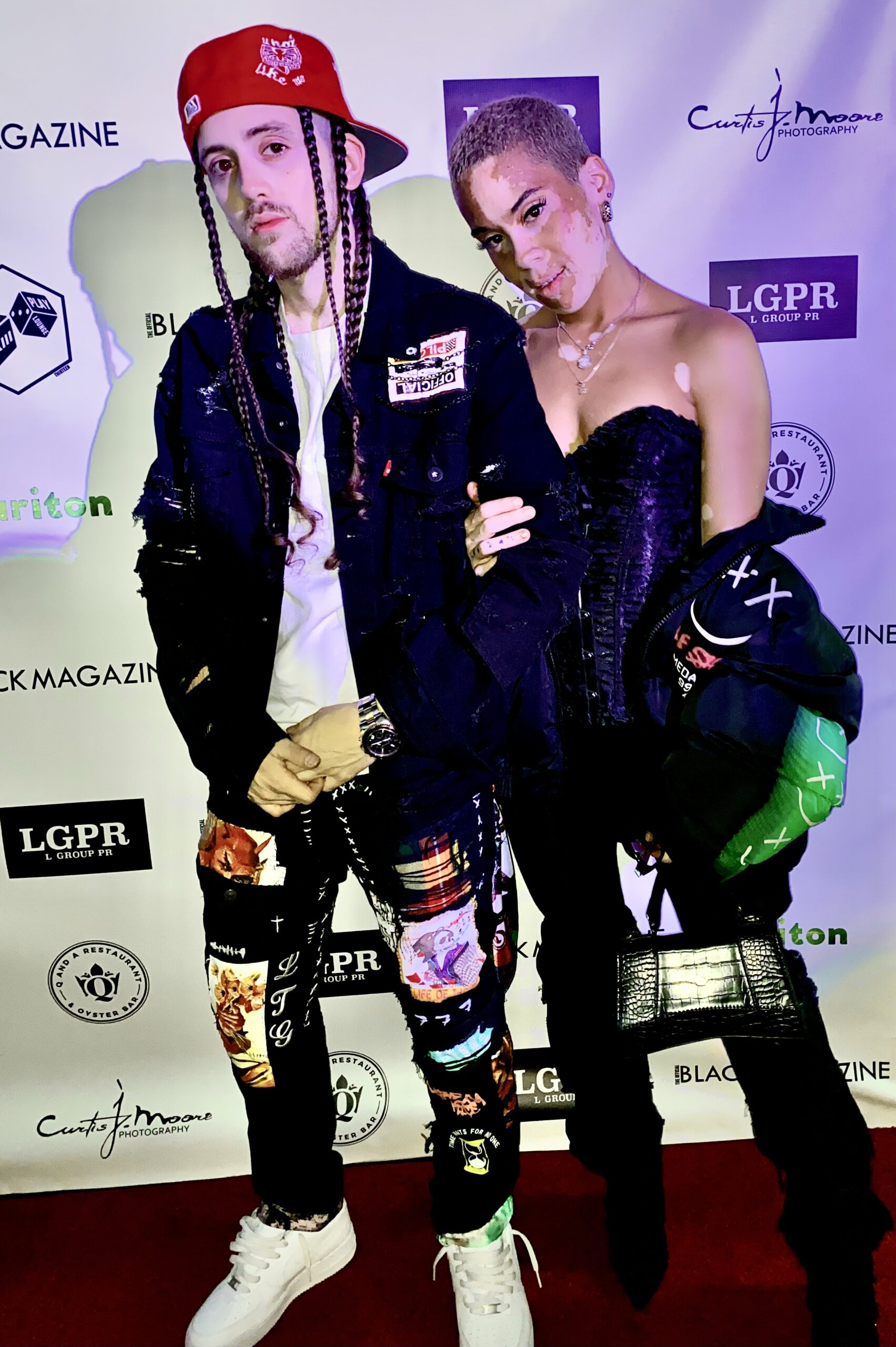 As if their own creativity alone wasn’t enough; Qween Bay and LorenzoTheGawd collaborate on a true one-of-a-kind look. As times progress and styles evolve, fashion seems to get more elaborate and unique. In an age where Hip-Hop Culture has become so deeply intertwined with the fashion industry and social media as a whole; a new wave of creative talent has captivated the forefront of modern streetwear.

With the Fashion World branching out further than ever, complete with healthy competition, all different types of creatives are establishing themselves within the fashion industry. For the past decade, LorenzoTheGawd, Musician, Designer, and Creative Director of BlackSheepForever, has fully immersed himself into the niche crux where fashion and hip hop coexist, creating irreplicable designs on wearable artwork.

“I started Making Music when I was like 12 or 13. Around the same time, I started sewing and making clothes, wallets, trinkets, shirts, etc. I always loved to create and display things. My parents encouraged me to keep doing it, and at this point, I’m a fully immersed Musician and Graphic Designer. It means a lot when people see your potential and believe in you enough to support your pursuit. Nowadays I make clothes and music with some of the coolest and most talented people.”

“I’m a very passionate person, so there are a lot of things I have my hand in. So you have to be able to really ﬁnd your ﬂow because all of it needs watering”

Qween Bay, known for her ability to capture the essence of emotion through her photographs; illustrates a deep knowledge and appreciation of her craft by creating scenes and images that express her overall creativity as an artist. A collaboration between two artists with such a unique vision of the world, as one may predict, has proven to be quite remarkable.

The concept they created for their streetwear look proved to be just as perfect as its execution as they unveiled their black-denim, distressed, streetwear, knee-high, stilettos paired with a likened jacket complete with a beautifully raw picture of Bailey emerging from the back.

What Lorenzo and Bailey (Qween Bay) gain by working together is not only the impact two motivated creatives gain by working in unison, but the ability to truly conceptualize a look and create it into a tailored look from idea to execution. This balance truly makes a drastic difference to those who juggle many different art forms such as these two.

“I’m a very passionate person, so there are a lot of things I have my hand in. So you have to be able to really ﬁnd your ﬂow because all of it needs watering”

With the hunger for unique fashion impeding the world via social media, the two have managed to turn a lot of heads, create a demand, and display amazing work for themselves and other artists/creatives.

The two have only started working together in the recent months following the New Yorker’s self-proclaimed ‘Great Escape’ from the east coast. With such similar styles and creative visions, it’s no wonder that Lorenzo and his LA-native counterpart, Qween Bay, would eventually begin to work together on their ideas.

Lorenzo’s output is multifaceted. In conjunction with creating music, artwork, and merchandise for his own brands and working in collaboration with See12Productions and One World Peace co, Lorenzo has been establishing something very special with custom 1-of-1 pieces. “Sometimes taking upwards of 40-50 hours on one piece,” these amazing and intricate designs are hand-sewn into a true masterpiece and do admittedly get a bit pricey.

“So precisely messy, so Peacefully Chaotic. These truly are one-of-one, and worth every penny.”

Bailey is not ‘just’ a model. In addition to being her own stylist, creative director, and [formally educated] personal trainer; she is a dedicated mother of 3, motivational speaker, humanitarian, and advocate for a variety of social justice constructs. Her background in photography, artwork, and fashion shines through her work and sets her apart from the competition she faces because her ability to transcend the physical barriers of what makes her art form so uniquely creative speaks volumes to all who view it.

Both Bailey and Lorenzo were asked what inspired them to pursue their dreams and they responded accordingly:

I want to be a heavyweight in this industry and to be able to use that weight and that afﬂuence to be the change I want to see in this world, in order to amplify the voices of those who were like me; in society’s blind spot…

“I’ve always been the type of person who creates everything themselves and fully puts their own essence on everything that is theirs. Aside from the music and artwork, I started sewing stuff when I was in middle school, and I’ve only progressed from there. When I really got into the game I painted and sewed on a lot of shoes, and then I started working a lot more with sweaters, hoodies, and eventually jeans. Now I truly just create works of art on clothing the same way I would if I were painting a picture, graphic, or writing music. It’s all just me, from the soul. It’s my inspiration in a tangible, viewable, or audible form.”

As far as what is to come; a large-scale merch drop from LorenzotheGawd’s Brand BlackSheepForever is imminent. Qween Bay and Lorenzo will be collaborating in the fall on a clothing project for her upcoming fashion events. Stay tuned for exclusive updates and access to upcoming projects. For any further inquiries, Bailey can be found on Instagram @TheQweenBayOfficial. Lorenzo’s work can be seen on his website: LorenzoTheGawd.com, and all his music or media content can be found by searching: LorenzoTheGawd anywhere.