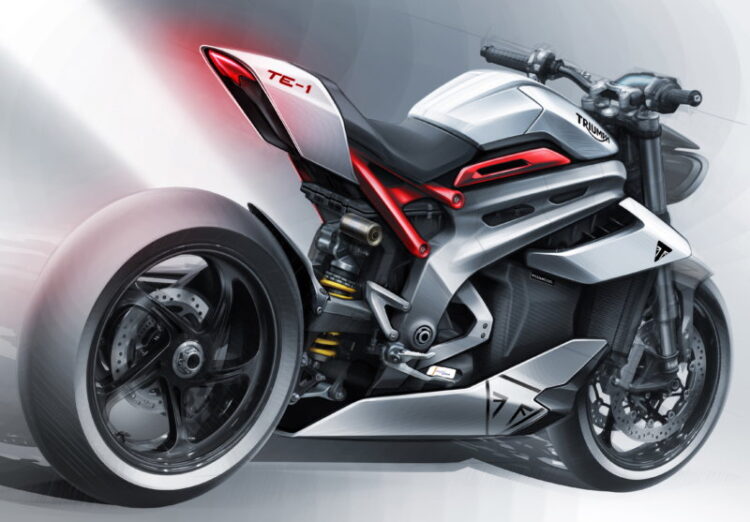 Triumph’s half production-ready all-electric prototype has the potential to change the way we think about performance electric motorcycles.

The gradual ditching of pistons has been the recent trend as more and more automotive manufacturers are coming into the game. Triumph is no exception except the fact that Triumph is developing a game-changer electric motorcycle rather than just an electric offering in their lineup. Although there have been really fast electric vehicles out there, the electric motorcycle market has not really gained momentum as compared to electric cars. There’s where Triumph is planning to invade the market with its upcoming Electric motorcycle whose prototype name is given as Triumph TE-1. Let’s find out what’s hot.

When and how did it all start?

About 2 years ago Triumph announced that they are collaborating with Williams Advanced Engineering, Integral Powertrain, and WMG to develop an all-new electric motorcycle platform and all the related integrated systems. The goal is to enhance the credibility and show off the capability of British engineering by developing technology and an ecosystem for the future of electric mobility.

Triumph wanted to develop an electric motorcycle that would be something that no one has ever seen. They have communicated with their customers to know what they want from their future Triumph motorcycle and acted accordingly. Halfway down the development, Triumph has revealed some details about the new drivetrain, battery, and some prototype sketches of the TE-1.

Triumph has officially made statements about the upcoming electric motorcycle to be inspired from their street and speed triple family and their released sketches depict the same. It draws upon the key design features of their naked bike lineup but with an even more angular, sharp, and slanted forward stance.

The official sketches reflect a careful overlapping of the traditional Triumph design elements along with futuristic design hints. Even with all its eye-catching lines and design, the Triumph TE 1 concept doesn’t scream about its electric drivetrain and looks quite conventional.

Triumph along with the collaborating company- The Integral Powertrain has tried to make the drivetrain as light as possible and as compact as possible. This is achieved by integrating the electric motor with the inverter into a single compact unit. The resultant motor has been tremendously light and small as compared to anything available on the market, with the scale tipping just over 10 kgs.

Not just the weight, but the power output density has been taken care of as well. Intensive focus and effort have been given by the collaboration to make an electric drivetrain capable of squeezing a lot of power from itself. As a result, the mere 10kg engine was able to produce over 130kw (180bhp) of power in a bench test, which is unmatched by any standards.

The Heart of the Triumph TE-1

At the heart of any electric vehicle, the battery has been the main limiting factor in terms of performance, weight, range, and reliability. Triumph has taken feedbacks from all its potential customers and designed everything according to what they want in a  performance electric motorcycle. The battery pack is designed in such a way to ensure the power delivery is constant regardless of battery charge level, whereas other EVs will witness a drop in performance as the charge plummets.WAE merged two cell chemistry thus enhancing high energy density as well as high power density, providing more power for a longer period of time. With the resultant battery pack, they have pushed the boundaries in the battery department to make the unit as compact and as light as possible while making sure of the optimum position of the battery pack within the frameset. This would ensure a lightweight machine with a perfect distribution which would make for a fantastic handling motorcycle.

What about the production-ready model?

Triumph also officially stated that a rideable version of the prototype model is on the cards in 2021, however, the production version could take another year to be revealed. Sadly Triumph might not bring it to the Indian shores anytime soon. Considering the electric vehicle price in India to be highly sensitive, Triumph might not want to risk the failure of such a premium offering in the Indian Market

The prototype Triumph TE-1 is an all-out effort to develop not just a revolutionary electric performance-oriented motorcycle, but develop an advanced, refined, and flawless technology for futureproofing performance-oriented motorcycles. With the new technology, Triumph can successfully end the stereotype of electric motorcycles to be slow, boring heavy, and less capable, as the new TE 1 is a good 80% more powerful than its closest competitor, Harley Davidson livewire and the Zero SR/S. With a major Motorcycle manufacturer like Triumph, taking a huge stride in the Electric motorcycle market, their production-ready version of the TE 01 seems to be a start of a new era of two-wheeled Electric mobility. But again,shiftup.club always gives significance to the charging infrastructure before the EV themselves. Thus Triumph along with other manufacturers needs to step into the charging infrastructure as well, thus helping to create an entire electric ecosystem for two-wheelers. If everything goes well, Triumph along with its collaboration has the potential to do to the electric two-wheeler market what Tesla did to the Electric car market.

Why Are Retail Management Softwares like People Counter Getting So Popular