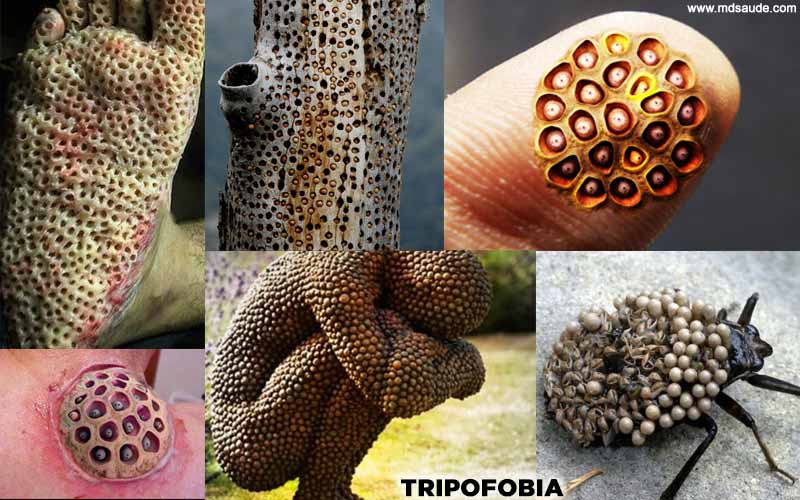 Trypophobia, which literally means fear of holes, is the name we give to a condition that makes certain people feel aversion or discomfort when exposed to images that create patterns of holes or bumps.

Although very popular on the Internet, trypophobia is not a disease, much less a real phobia. This condition is not recognized by the scientific community nor is it described in the Diagnostic and Statistical Manual of Mental Disorders (DSM-V) of the American Psychiatric Association, which is the most widely used categorization manual for mental disorders worldwide.

It is important to note that although trypophobia is not considered a mental disorder, it does not mean that there are not millions of people who are truly uncomfortable when seeing images of small holes together, especially if they are in a biological environment, whether on human skin or in another living being (the author of this text is one of them).

In this article, we will explain what trypophobia really is, what its causes are, its symptoms, and why it is so little studied scientifically, even though it is so common.

If you can barely look at the images below, if you feel terrible distress, feeling uncomfortable, and even itchy skin, you probably have a so-called trypophobia.

The name trypophobia, despite seeming scientific, was created on the Internet, probably in 2009 on a Facebook page. The author of the page noticed that he felt distressed when seeing certain holes and decided to create a community to know how common he felt was common. In a short time, the page became immensely popular and the term ended up catching on.

Therefore, the word trypophobia is not a scientific term nor was it created with the intuition of describing a widely studied and clearly characterized condition. Depending on the source you search for, definitions may vary. In general, trypophobia is a feeling of aversion to grouped images of small holes or reliefs.

As already mentioned, trypophobia is more common when these images of small holes are associated with the skin or living beings, as in the photos above. As we will see later, trypophobia is more intense if it arouses in the individual a feeling of being linked to a disease or a parasite’s presence.

When we use the same geometric pattern in images that do not clearly arouse the idea of ​​skin disease, as in the images below, the number of people who report feeling uncomfortable drops a lot.

What seems to cause the discomfort are not the geometric images themselves, but the type of memory or sensation they awaken. If the patterns of holes or reliefs make the individual think of diseases, skin lesions, poisonous animal burrows, or toxic or contagious substances, trypophobia is more likely to arise.

TRIPOPHOBIA IS A REAL PHOBIA?

Trypophobia is not a real phobia. We consider phobia to be a type of anxiety disorder that is characterized by significant fear of a particular object or situation. Classically, the phobia leads the individual to behave in an uncontrolled and evasive manner, that is, to flee in fear.

The feeling of fear that a person with a phobia of cockroach, spider, height, airplane, needles, or closed places feels is infinitely more intense than the uncomfortable sensation that a set of small holes causes in most people. Seeing an uncomfortable or disgusting image may even cause some discomfort, but it will never have the same negative influence on your life that real phobias do. People who claim to have trypophobia do not lose control when they see small holes. You may not be able to look for a long time and some people report itchy skin, but the sense of panic from a real phobia does not exist in the vast majority of cases.

However, it is important to note that there is a phobia for everything. There may be people with a real fear of these little holes. However, the patient fits into what we call a specific phobia, which is a widely recognized psychiatric disorder.

Because it is not a real disease and because it does not impact people’s lives, trypophobia is a condition that has been little studied and practically ignored by psychiatrists.

The few scientific papers published have focused on the causes of this bad feeling, which apparently has an evolutionary origin.

The first study published on the subject is 2013, in the journal Psychological Science. In it, the researchers speculate that trypophobia may have an evolutionary basis, as these groups of holes share visual characteristics with venomous animals (or their dens) that humans and their ancestors have learned to avoid as a matter of survival.

A 2017 study by the Journal Cognition and Emotion suggests another theory about the origin of disgust at these holes and protrusions. The researchers believe that these geometric patterns resemble contagious or parasitic diseases that mainly affect the skin. Aversion to similar images would therefore be a defense mechanism for the individual to avoid and move away from potentially contagious skin lesions.

The few existing studies have shown that there is a wide variety of signs and symptoms among trypophobes. In the mildest – and most common – cases, the individual reports only a feeling of aversion, with no other associated signs. In the most intense cases, the individuals studied tachycardia (fast heartbeat), damp hands, itchy body, need to rub hands on the skin, nausea, and even episodes of panic and fainting.

In the most intense cases, the association with other psychiatric disorders is very common, especially with other phobias and anxiety disorders.

In the vast majority of cases, patients with trypophobia do not need any treatment, as the problem has no impact on their quality of life. If you want the images to stop bothering you, the simplest way is to see several images of holes and protrusions get your brain used to them. Over time, you end up creating tolerance. However, if the images provoke more than just a feeling of disgust, you should seek help from a psychiatrist. In such cases, treatment is basically the same as other types of phobia, through cognitive behavioral therapy.

Why Sleep Matters When It Comes to Health