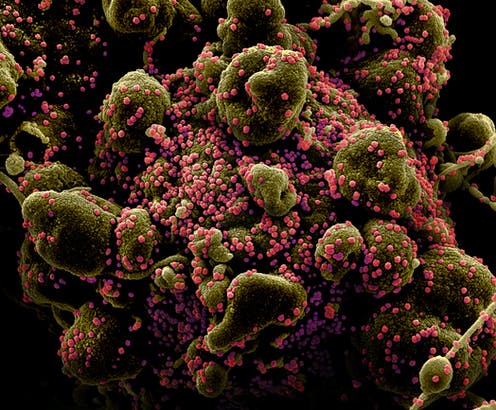 The immune system protects us, but in the most serious cases of coronavirus it seems to be overreacting and counterproductive, as it happens in other diseases

From the cases that go unnoticed because they do not give symptoms until death: the range of reactions caused by SARS-CoV-2 is wide and perplexing. Why does the same infection have such disparate effects? If statistics tell us anything, it is that age has a lot to do with it. In the first decades of life, there are hardly any complications, although some specific cases are difficult to explain. On the other hand, as the years of the patient’s increase, hospital admissions, cases in the ICU and deaths multiply.

Can everything be explained by the existence of previous pathologies? Hypertension, diabetes and cardiovascular diseases have been identified as risk factors, but there is a more basic question: what does the immune system do when attacked by an external enemy. In the face of an unknown virus, an innate response occurs, and, later, when our defenses already recognize the pathogen, the adaptive response arrives, which acts specifically against that threat. However, something seems to be failing in the most serious patients of this new coronavirus in this second phase: an exaggerated response that ends up causing damage to the body and does not prevent the virus from multiplying.

The SARS-CoV-2 coronavirus causes more serious cases and deaths in people suffering from other pathologies, but the mechanisms by which it occurs are unclear

“It is striking that there is a lot of heterogeneity in the clinic of this virus, and this may be related to a wide variety of immune responses, some are more effective and neutralize the virus, and others lead to the disease, ” José Manuel told Teknautas Bautista, a molecular biologist from the Complutense University of Madrid, “but we really still know very little, each virus can behave differently even if there are common characteristics among those of the same family.”

“Viruses behave differently in each individual and challenge their immune system, ” explains virologist Raúl Ortiz de Lejarazu, former director of the National Flu Center in Valladolid. “What happens in each body has to do with individual factors that we do not know well, we know in the flu and in other diseases already studied, but not in this coronavirus,” he admits.

As an example of the heterogeneity in the response to viruses, this expert gives an example he knows well: “ In the 2009 influenza A pandemic, it was soon seen that the obese reacted worse, among this group there were many more people who fell ill with seriously because they had a different inflammatory profile than people with normal weight. ”

How the immune system reacts

At the beginning of an infection, the innate response occurs — it is called that because it is common to all people against a pathogenic microorganism, even if we have not been exposed before. This works “by a very primary system: I know you or I don’t know you, you are strange or you are not .” If we do not recognize it, a series of mechanisms are set in motion, for example, we secrete proteins called interferons and cytokines. “If this occurs normally, the result is a good physiological response that tends to heal the individual,” explains the expert.

The next step is the adaptive response. “It is a response adapted to the new pathogen as if the tailor had already taken the measurements and made the right suit against the aggression, ” he says. That is why, in almost any infection, antibodies (substances to combat it) are generated from day 12 or 13, which makes the primary and innate response more effective.

However, severe cases of coronavirus appear to be related to an exaggerated response by the immune system, which experts call a “cytokine storm.” This term was coined around 15 years ago when serious cases of avian influenza in Asia were being investigated. People who reacted badly and died had secreted many inflammatory cytokines, that is, a type of protein that generates inflammatory phenomena indiscriminately in the lung and other organs. Instead of collaborating with each other, they “ generated friendly fire damage ”.

Ortiz de Lejarazu’s research group observed that the same was true in severe cases of influenza A, according to articles they published in 2011 and 2012. That cytokine storm also happens again in severe Covid-19 cases. “ Our immune system, in the effort to eliminate the virus, damages cells and organs. The end result is that it does not control the virus, which continues to multiply, “he says.

In very different diseases, it also occurs. Bautista knows the case of cerebral malaria thoroughly. “There are many people who become infected in Africa, but only a specific population group dies, children who react aggressively with their immune response. All this is very similar to what is being described ”, he points out.

Other external factors do not influence the fact that a patient reaches this serious situation, such as having been in greater contact with the disease, as happens to health professionals, according to Ortiz de Lejarazu, who warns about the confusion that is generating the viral load concept. “It is only a parameter used in medicine as if we were talking about fever. What the viral load tells us is whether a virus is multiplying too much or too little in an organism. For example, in HIV, the viral load is used to know if the person who is infected is responding well to treatments or if, on the contrary, the amount of virus in their body increases. ”

When one acquires the infecting dose, one becomes infected. If you buy three doses, 10 or 20, you get the same infection but you will not be more serious

However, in this crisis, this concept is being misrepresented, and some are implying that the virus can accumulate through continued exposure. “The toilets do not go with a backpack carrying viruses,” he clarifies, “a person becomes infected because they acquire an infectious dose, that is, a certain amount of microorganism.” Scientists calculate what viral load is needed for contagion in mouse experiments.

“When you get the infectious dose, you become infected. If you get three infectious doses, 10 or 20, you get the same infection, and that does not have any significance on what will happen next, because in reality on the second or third day of being infected, a person produces millions of infective doses. In the body, we amplify the infective dose a lot of times and there we do talk about the viral load. The only consequence of viral load is that a person who is producing more viruses has a greater ability to transmit them, “he adds.

On the other hand, José Manuel Bautista does not rule out that prolonged exposure to the virus could have something to do with severe cases. “If only a few units of the virus infect you, they could reach a few cells and perhaps the immune response would be activated progressively so that it could contain itself better,” he says. However, “this is only a hypothesis because no experiment has been done to prove it, to see if this is the case, it would be necessary to subject mice to different viral loads and that, as they increase, there comes a time when the answer immune was not efficient. ”

The coronavirus viral load appears to peak in the first week of illness, and in mild cases, it would clear rapidly. However, seriously ill patients tend to have a high viral load and a longer period of virus shedding, according to an article published in ‘The Lancet ‘. Therefore, the viral load could be a marker to assess severity and prognosis (although this is not related to the possibility that viral load is related to prolonged exposure).

In any case, in the absence of experiments that can confirm or deny this idea, the researcher at the Complutense University considers that the reason why health professionals get sick is more likely due to other factors, such as stress decreases their immune response.

Why Sleep Matters When It Comes to Health